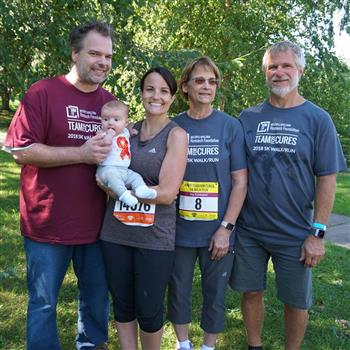 2019 will mark the 9th year that our team will participate in the MMRF Multiple Myeloma 5K Walk/Run Team for Cures program in continued support of my son, Nate, and in memory of Jeff Carlson (a friend of Nate’s) as Team Jeffy C and TNT.

Come join our team or consider donating - it’s a great way to spend a few hours walking around a lake, enjoying the outdoors, and supporting a great cause.

Research into new drug therapies has changed the average lifespan of someone with Multiple Myeloma from 3 years up to 8 years and counting. There have been over 6 new drugs for Multiple Myeloma approved in the last few years. That means not only another option for treatment, but another treatment combination. Let's allow them to continue the research needed to make this a chronic disease, or better yet, to find a cure.

Thank you so much for your support!
Naomi

10. RSRandy And Fran Snede
Good luck on the walk/run in September. Fran and Randy

13. SMSarah Moeller
So proud of you Naomi, for helping raise awareness and research funds for multiple myeloma! Am cheering you all on!! xo Sarah Moeller

15. ?Anonymous
My continued support and prayers